Austin’s famous unofficial motto is Keep Austin Weird. Established by local businesses, it’s an effort to encourage individuals to buy from Austin-run businesses and grow the local economy. BFF hates it and dislikes when she inadvertently (inevitably) describes something in Austin as weird. I kind of love it, however. To me, it embraces that which makes businesses exist there and not elsewhere and experiences you can only have in Austin. But it also expands beyond the businesses to the people themselves. Austin welcomes that which makes us unique as humans. And that’s pretty cool.

With BFF and family living in Texas, I’ve spent a fair amount of time in Austin. During my summer of travel, I got to experience a month of Keep Austin Weird and break away from the traditional tourist items on lists on this topic. Everyone knows about the Museum of Weird or the Cathedral of Junk. I wanted to find things a bit more “local” that might not be on lists as frequently. So here are my 10 recommendations for distinctive, Austin activities.

Now, most of the time when you go to a botanical garden, you’ll walk along beautifully groomed paths and see native and non-native plants that are well tended. There is nothing wild about them.

The wildflower center in Austin does have groomed paths and the flowers are taken care of, but all the flowers are native to the state and grow a little more haphazardly than your normal botanical garden. They grow as they would in the wild, and it’s beautiful to see.

Ladybird herself planted some of the first flowers and she helped along side her volunteers for decades. She wanted to make it a fun and kid-friendly family destination, so you’ll find lots of activities and areas just for children. One section even teaches kids about how Native Americans lived and gives them the opportunity to build their own home as those who lived off the land once did.

University of Texas students get in for free, just as an FYI.

2. Kayak with some bats. 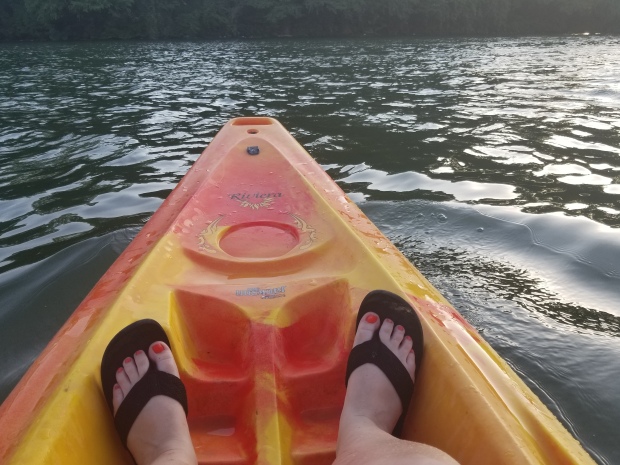 Okay, so most people know to go see the bats in Austin. This experience in itself is Austin Weird. The South Congress Bridge, due to its hollow design, is home to the largest urban bat population in North America. From March to November, you can see a million bats fly out of the bridge at dusk and fly east along the river. It’s a pretty spectacular site, even if you feel iffy about bats.

To make the experience more unusual, book a kayaking tour. Instead of watching from a motorboat, the bridge, or the banks of the river, you can see them from directly under the bridge. Just don’t look up with your mouth open!

3. Eat at some food trucks.

Like Portland and Los Angeles, Austin has created regulations (or removed barriers) to make it easier for food trucks to operate within city limits. In fact, according to the U.S. Census Bureau, in 2016 the only city to have more food trucks per 100,000 people was Portland.

But here’s the weird thing about the food trucks in Austin – they don’t move. Whereas in New York City or San Francisco you’ll have apps that track where a truck is or things like Moveable Feast that bring lots of different trucks to different locations each week, Austin has permanent locations for food trucks, complete with benches for outdoor seating. Some even have umbrellas. The trucks still have wheels and can drive themselves, so they are in fact food trucks and not trailers. But they’re on blocks. I even went to one – Acai Hut – that had a wooden porch from which to order.

So make sure to do the Austin thing and eat a food truck court.

I’ve heard of paint your own pottery or canvas. I love Color Me Mine and even attended a few Paint Nites. But paint your own distressed sign? That’s a new one. And definitely not something you’ll find in many places.

Board & Brush allows you to pick from various designs. They provide the stencils and wood. You get to pick your own stain and paint colors, making each sign unique to you. They encourage you to bring snacks and drinks, which adds to the fun atmosphere.

Some pro tips: If you want to customize the stencils, you can do so, but you have to tell them up front. They need time to make the stencils before you arrive. Also, if you’re traveling like I was, make sure to think hard about what size sign you get and if you will need to ship it home or fit it in your suitcase. I planned poorly, and TO had to ship my sign to me.

5. Listen to LBJ tell some jokes.

Yes, it is a little creepy. But also cool. The LBJ Presidential Library is a must see. The exhibition covers his life leading up to Kennedy’s assassination and his time as the U.S. President. They do a fantastic job of incorporating technology from his time as president – old TV sets and phones – with new technology – interactive exhibits.

They have old recordings from LBJ, Lady Bird Johnson, Martin Luther King Jr., and some of their contemporaries. And the truly Austin thing? The created a life-sized bust of LBJ himself that uses audio recordings from his time as president to tell jokes. Dad jokes. It’s the best.

6. Take a break with Chuy’s, the real Tex Mex

Let me start by saying as a gal from California who’s traveled to Mexico a few times, you cannot expect Chuy’s to be anything like Mexican food you get elsewhere. Tex Mex is a food onto its self. For starters, there’s not a single dish without cheese, except maybe one of the soups. I love cheese, but if you are a vegan, Chuy’s is not the place for you.

Each Chuy’s is decorated differently, though in a similar vein. There are hubcaps, hand-carved signs with silly sayings, shiny booths, and some memorabilia related to Elvis. But all the locations have their own eclectic faire.

And trust me, if you leave hungry it’s your own darn fault. The portions are huge and everything is delicious. Make sure to order queso dip, a Tex Mex staple.

When my friends and family first started talking about “tubing,” I was confused. Tubing to me is holding on (for dear life) to an inflatable tube pulled by a speedboat as the captain tries to toss you into the lake. As we got older we added second tubes to the mix and my brother and I would use our hands and feet to try to flip the other’s tube. It is not a relaxing event, and you certainly cannot drink while tubing.

In Texas, and I gather other parts of the South, tubing is not a sport, but calmly floating down a river. No paddles or motors. Just beholden to the current. On the hot summer, or fall, or spring, or winter really, days, floating on an inflated tube down a nice, cool river with a drink in hand is pretty delightful. Maybe not Austin specific, but certainly a little weird.

8. Enjoy some simple games at a Pinball arcade.

Miss some of the older arcade games? Celebrate the child inside you with a fun afternoon at Pinzball Arcade. It has over 150 pinball machines and lots of other games. I rocked the shooting game, which had a gun with a weight and pull similar to a real gun. BFF and I also loved, despite being terrible at it, a drumming game where we attempted to play Spice Girls and other songs from our childhoods in the 90s.

Sure, you could go to a regular movie theater just like any other town. Or you can enjoy your favorite old time hit or new release in a different kind of way through either the Blue Starlite Drive-in or the Alamo Drafthouse.

At Starlite you can bring your own snacks or indulge in s’mores by the fire pit. Audio is played both by radio and on speakers, so you can stay in the comfort of your chair, bring folding chairs, or sit at one of the benches. It’s fun, throwback delight!

Alamo Drafthouse is dinner and a movie – at the same time. Order food before the movie starts and waiters bring it to you to enjoy during the feature. They even offer a small selection of adult milkshakes. Mmm. But be careful: talking is not allowed and you will get kicked out. They are very strict about it.

10. Indulge your senses with gourmet doughnuts. 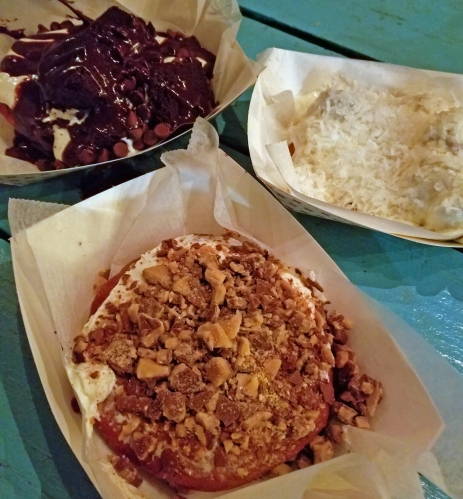 No Keep Austin Weird list is complete without a nod to Gourdough’s. You may think you’ve had fancy, gourmet doughnuts before, but let me assure you that compared to this place it’s like saying Trader Joe’s wine is extravagant. BFF and TO treated me for my birthday, and I loved every single bite. Did not miss cake for a single moment.

Do it in true Austin style and go to their food truck. These doughnuts aren’t a treat for the faint of heart or post dinner delight. They are the main event!

Next time you head to Austin, try one of these activities or find your own. Let me know how you enjoy Keep Austin Weird in the comments.