Memorial Weekend, Tall One, Miss Model, BFF, and I planned on traveling to Amsterdam so I could cross of another country from my list. We couldn’t quite get our schedules to work (Monday was not an Irish holiday so Tall One (my sibling) had to work and Miss Model (sibling’s girlfriend) had an event on Sunday). Instead we checked off something else that was on both Tall One’s and my bucket list – Northern Ireland.

Tall One drove us up to Belfast. We started with the Titanic Museum. 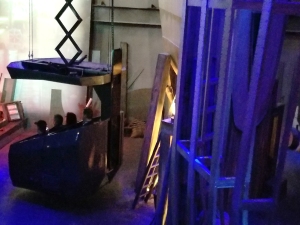 One of the other things I wanted to see and which none of us had visited before was Giant’s Causeway, where the ocean has caused the lava rock to shape into cylindrical columns. Some people describe them as stairs. Personally, I think they look like the pipes of an organ. Lots and lots of pipes. There are over 40,000 of these columns. It was a cold, foggy day, but luckily it was a high fog so by the time we made our way down to the columns, we were far enough under the fog bank to have decent visibility. I may have even stepped down a more precarious side of one of the rises to get some pretty pictures of flowers. We realized only afterward that the audio tour is included in tickets. I think it would be a good thing to have. If you go, make sure to grab yours. 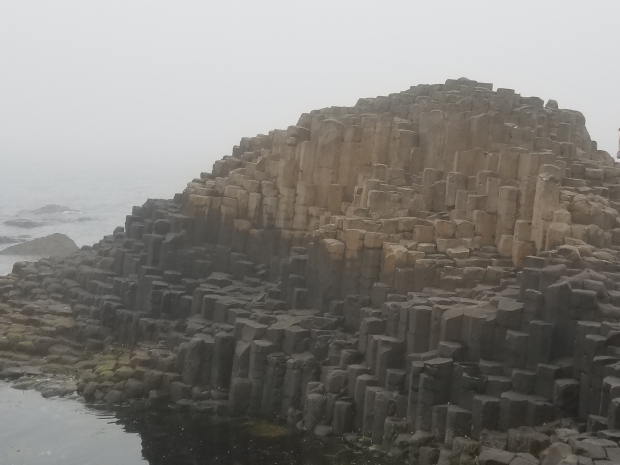 BFF, Tall One, and I enjoyed a wonderful breakfast at San Lorenzo’s. I indulged a bit due to the heartache and ordered Coco Pops French Toast. It is French toast, smeared with peanut butter, sprinkled with coco crisps and topped with chocolate sauce. And it is AMAZING. Probably not the protein kick I needed for a day of walking around the city, but exactly what I needed for everything else. Then we left Tall One and headed off to the Guinness Storehouse. I’m not one for beer, or drinking in general, but this was an excellent experience.

From there BFF and I walked to the Dublina Museum. It’s a museum dedicated to the history of the Viking section of Dublin. It’s full of very interesting information, especially the Viking history. However, it was a let down after the high-quality of the Guinness Storehouse. It’s a museum that’s created for small children with interactive exhibits that will appeal to kids. There’s even a man taking a dump, complete with sound effects. Yep, you read that correctly. So our recommendation is definitely to do these two in reverse order. End your day with a Guinness.

One of the trips I didn’t get to take when I was in Ireland back in college was see the Cliffs of Moher. Since we didn’t go to Amsterdam, BFF and I booked a bus tour on our Monday holiday while Tall One and Miss Model had to work. I highly recommend going. We went with Paddywagon Tours, which was an excellent experience. We had a couple of stops on the way there, including lunch where we had a smashing tuna salad panini, Another stop was at a small Irish town that had a store where local artist and designers sold their work. I found a super cute headband that will be perfect for foggy nights in SF. We were extremely lucky and had beautiful weather all day, so it was, dare I say it, warm when we got to the cliffs.

I found the cave they used in Harry Potter and the Half-Blood Prince. We hiked up past where the path turns from paved to dirt. I was so proud of BFF; she was brave and even sat on the side of one of the cliffs. It was so nice to get out of the city and see one of the beautiful sites I normally think of when I think about Ireland. 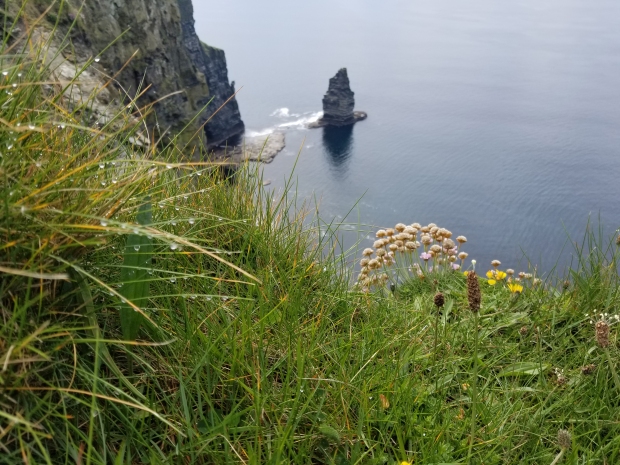 Flowers grow in the rocky cliffs despite the elements

Cave from Harry Potter and the Half-Blood Prince

We did pretty good for a long weekend, don’t you think?