Lately, there has been a lot of talk about how we can get girls involved in STEM and how they don’t have role models in pop culture (books, TV shows, movies, etc.). This is certainly true. A study by the Geena Davis Institute on Gender in Media found that in 129 top-grossing family films (2006-2011), only 26 characters in STEM fields were female, compared to 134 male characters.

So, in honor of Women’s History Month, we decided to create a list of our favorite, awesome, STEM characters in pop culture. I had five fellow women help me come up with this awesome list of our top 5 favorite characters, and a list of 15 honorable mentions. They may not be “historical” but they are a part of pop culture history, and that’s important too!

Warning: There are lots of spoilers!

Willow from Buffy – written by JS

Willow Rosenberg is Buffy the Vampire Slayer’s resident witch, and an all around badass. When we meet Willow in season one of Buffy, she’s an intelligent, albeit awkward sophomore at Sunnydale High. What she lacks in social skills she makes up in various fuzzy animal sweaters. While she starts off as the Scooby Gang’s default damsel in distress, she finds a path to witchcraft through being a science whiz, and grows to be arguably the most powerful character of the series. Willow’s character arc is one of the most poignant and harrowing of the Scoobies. We watch her grow from self conscious, shy school nerd to a powerful witch holding her own against the demons and creeps of Sunnydale. We see her fall in love with Tara, in one of the first portrayals of same sex couple on television at the time. In later seasons, Willow becomes addicted to magic, causing her to lose her love, and nearly destroy the world in the process. Witnessing her struggle in working to gain back the trust of her friends and even herself is painful. In the final season of Buffy, we see the gang fight against the scariest Big Bad of all, and Willow, recovering from her addiction refuses to use magic, fearful she’ll lose everything she’s regained. In watching this struggle, the culmination doesn’t feel unearned. Using her magic to save the WORLD when she imbues all the potentials with the powers of real slayers, we see her turn into an actual goddess in the process. In empowering other women to reach their full potential, she tapped into her own. What could be more inspiring than that? 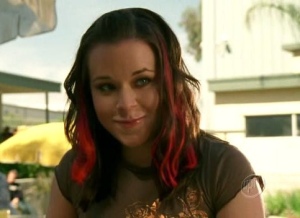 “Mac”, A.K.A. Cindy Mackenzie from Veronica Mars: nerd extraordinaire and hacking genius to boot, always there for the show’s lead character (and her good friend) Veronica, using top-notch computer skills to help solve cases. Why is she an awesome character? For a number of reasons, from the fact that she’s a badass techie helping to solve crime alongside another strong female protagonist, to her vulnerability, humanity, and humor which made her relatable to all the curious, complicated, and geek-tastic Marshmallows watching the show. She showed us that we can be, do, and feel anything we want, and that it’s ok not to conform. We can try on different aspects of ourselves and keep or shed them as we see fit, not as anyone else deems appropriate or acceptable. Though jokingly referred to as “Q” to Veronica’s “Bond”, Mac actually embodies an evolving concept of self: from being timid and seeing herself as a side-kick to empowering herself in thought and action, speaking her mind honestly, standing up bravely to friend or foe for what she believes in, being true to herself no matter the situation (whatever that self might be in the moment). Her tenacity, empathy, and smarts inspired many aspects of my life, and I believe will prove inspirational for viewers in generations to come as they proceed along their own unique journeys of self-discovery. I wish that I could be half as bold, courageous, and kind as she is in living life on her own terms. But at least I’ve had one helluva role model.

Women of Bones – written by KB 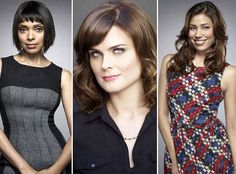 When I started thinking about inspiring fictional female characters, my mind went straight to Bones. There may have been a two-week-long binge that consisted just of Bones and pajamas. While the storylines are exciting and the romance between characters is enticing, one of my favorite parts of the show is the number of intelligent women they portray in different STEM roles. Dr. Temperance Brennan, better known as Bones, plays the socially awkward forensic anthropologist and author. While her social interactions are cringe worthy at times, she is an intelligent and passionate scientist, friend, mother, and wife. Dr. Camille (Cam) Saroyan is the director of the forensic anthropology department where she works with bodies that still have flesh. In addition to being an amazing leader (she is one of the few who is willing to go toe-to-toe with Bones), she also adopted her ex-boyfriend’s teenage daughter after he was murdered. Easily my favorite character of the show is Angela Montenegro. She combines art and science in a way that gives life to a show that is about death. Seeing three different women, along with a few interns, catch the bad guys through science is both fun and satisfying. It gives girls an opportunity to see a few different ways to use science by three very different personality types.

Felicity from Arrow – written by FF

Felicity is totally my fictional girl-crush. She’s awkward in a super adorable way, kick ass in her computer savvy capabilities, and independent enough to stand up to Oliver when he’s being overbearing. Even before she became the sole love interest for Oliver, she was the heart behind the team. Diggle would push at his conscience, but Felicity would always appeal to his humanity. She was, after all, the first person to get Oliver to nearly smile after returning from the island. Her hacking skills helps Oliver and Diggle, and eventually Roy, Laurel, and Thea get out of scrapes over and over again. And while the writers certainly giver her some more dorky traits – her penchant for over talking when she’s nervous for example – they don’t make her you stereotypical, anti-social computer nerd. She has some of the best fashion on the show. I would love any of her dresses, seriously. I love that they put her and Oliver almost in a reverse role than normal for most of the show – Felicity is the one who ogles Oliver often as he works out, whereas Oliver first notices Felicity for her brain not her looks. Felicity proves her computer skills so much that by the current season she is CEO of a huge tech company. She is the type of tech girl we’ve been missing from TV shows, one that we can look up to and love! (Can also just say how awesome it is to see how equal the gender grouping is on this show? It’s doing a much better job than either of it’s spinoffs)

Dr. Maura Isles from Rizzoli and Isles – written by FF

It’s super unusual to have a show with two female leads, which is only one of the many reasons I love this show, and I love seeing Maura as the Chief Medical Examiner of Massachusetts (in one of them most popular cities in the U.S.). Maura has a pretty stereotypical science background; she was shy and “weird” growing up, bullied with nicknames like “Maura, The-Bore-A,” and preferred examining dead bodies because she was afraid others would tease and make fun of her. As an adult, however, she has grown into a confident woman. She may still be basically a walking encyclopedia, randomly spouting out facts that aren’t always relevant, but she also stands up for what she believes in and has become quite comfortable with her colleagues. Interestingly, she seems to still have trouble with men due to her consistent, sometimes brutal, honesty, despite having gotten completely over her awkwardness with Jane. Maura also has impeccable taste in clothing, to the point of it also being inappropriate for crime scenes. It contrasts nicely with the butch Jane Rizzoli, her best friend and lead detective, and demonstrates that there can be an awesome spectrum of capable, strong women.

We did notice as we were doing this that their is a terrible lack of racial diversity. Clearly we still have more work to do!

Most people I've met who aren't from CA think of it as a beach state, full of surfer-bro types. While there are certainly those elements, especially in SoCal, when I think of CA, especially spring in CA, I picture rolling green hills covered in beautiful, colorful wildflowers. I'm so grateful that I live in a place where I don't even have to get in a car to experience the beauty of nature.
My awesome co-worker made me an otter!!!!!
Just a day with some flowers.
Found a waterfall I never knew existed today. Nature can still surprise me.