“A ship in port is safe; but that is not what ships are built for.” – Admiral Grace Hopper

Last week, I attended the 2015 Grace Hopper Celebration of Women in Computing, presented by the Anita Borg Institute (ABI). It’s the largest conference for women technologists in the world. It’s a cool historical feeling, to attend. ABI and GHC grew out of Systers and, an idea Anita Borg first thought of when she only ran into other women in the bathrooms at tech conferences because there were so few of them. Now, 15 years later, GHC is so large women routinely take over the male restrooms, and we had a dance party that filled the Astro’s ballpark. 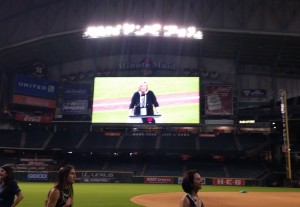 It was my first time attending, and it was unlike any other conference I’ve ever attended. Not because it is rooms upon rooms filled with an elusive type of person – the female engineer and coder. Not because I was surrounded by 12,000 (that’s right 12 THOUSAND) women. Not because the big name male CEOs, like Blake Irving, straight up addressed the issue of gender discrimination.

Those are all true, and certainly make GHC an interesting experience. But the reason that makes GHC truly unique?

It is a celebration, at every turn.

From day one, I could feel the excitement of those around me. Sure, some of these women would express disappointment over the next few days at some things that happened, but at their heart all of them were there to connect with each other, inspire others, and offer guidance to those just starting out in their careers. Together we applauded when someone shared a success. We paused to listen to those that were struggling. We even danced the night away when all the speeches were over.

Where else will you have this many people gather to celebrate the successes of women?

There are simply not enough places where women celebrate each other. I have been to other women’s conferences, and many of those focus on just the negative. I have often left feeling like it was just an extended complaint session. At GHC, I felt like most of the speakers and attendees acknowledged that yes, the tech industry has issues. But that wasn’t all they said. They offered suggestions, advice, and even encouraged action. They added to the conversation.

There were some huge names on stage and in the sessions – Megan Smith, Sheryl Sandberg, Chelsea Clinton, Clara Shih. I loved the main stage events (Nora Denzel is the best moderator, ever – you should watch Sheryl’s interview just for Nora). But I found my inspiration mostly in the smaller sessions and less-well known speakers. 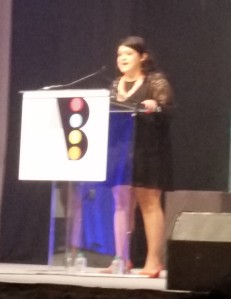 Maria Celeste Medina, the winner of ABI’s Change Agent ABIE Award, talked very little about her accomplishments and instead focused on how we “can all be change agents.”

A woman in the Women Tech Leaders in Government panel discussed how she used her technology background to create a system in the White House’s mailroom to answer letters. When she arrived during President Obama’s first term, the team was still tracking everything by hand. She digitized the system. Then, realizing that there were hundreds of letters not getting responded to because they were in foreign languages, she found a way for that system to use keywords to indicate what response was needed – making President Obama the first U.S. president to respond to foreign language correspondences. How cool is that?

Friday was the technical keynote and Manuela Veloso spoke about robotics. I was nervous about attending, thinking the topic would be above my head. But she made robotics relatable. And funny! If you’ve never seen robotic soccer, it’s a must. 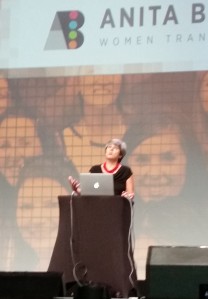 I loved hearing from Miral Kotb. As a dancer and a technologists, she found a way to combine her passions and created iLuminate. She was also the only woman on stage to deliver a key message: It is okay to be a woman and enjoy the feminine qualities, and still demand equal treatment. Wearing a skirt or enjoying dance does not make you any less of a coder. This is a great contrast to the typical message (which I feel the biggest name person there – Sheryl Sandberg – express subtly on a regular basis) of “be more like men.” At a women’s conference, it was about time someone said being feminine was okay too. Let’s remember gender is a spectrum and different people fall at different places on it.

It wasn’t all fun and games, of course. I would have loved to hear more on how start-ups can embrace diversity from day one. No one discussed the venture capitalists aspect of the tech industry. I think a diversity manager on the main stage to address hiring women and/or diversity beyond binary gender would have been a good addition (I mean if ABI is going to place non-tech women on stage, which they did, the most notable being Sheryl, could we also hear from people have successes making change at their companies?).

Here are some things I took away from the conference:

But, like I said – this conference was inspiring. I look forward to attending next year, hopefully! Let’s all remember:

“Men have no special skills that enable them to run technology companies.” – Susan Wojicki

2 thoughts on “From Bathrooms to Ballparks, the 2015 Grace Hopper Celebration”