I have thought about what topic to cover in my first post for a long time. I baked pumpkin chocolate chip cookies last week and knew it would be a good post, but I did not want to start my blog with baking. I want this space to be more than recipe sharing. I thought about sharing a work outfit, but that did not ring true either.

Then I went to the movies and watch The Intern. I knew almost immediately it was a perfect way to introduce my blog to the world.

During the first half of The Intern, I was excited. Here it was: the feminist movie that wasn’t in your face about feminism. It featured a successful woman, Jules, running her own start-up tech company, whose husband had given up his successful career to be a stay-at-home dad. Jules takes advice from a male in a previous generation, but at every step he was encouraging her and motivating her to succeed, not telling her to run things a different (aka his) way. She struggles with the very real issue of potentially hiring a CEO to help her start-up run better as it continued to expand. Yes, all the potential CEOs Jules talked to were males, but because we were never in the room and she never liked those she met, it felt more authentic than a statement about gender. 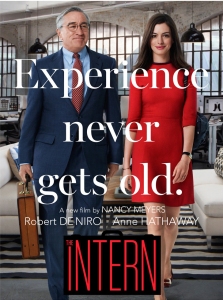 But then Nancy Meyers threw in a subplot that derails the message and added nothing to the overall plot: Her stay-at-home husband has an affair. He was an awesome addition to the movie until that point. He gave up his career to stay home and raise their little daughter. He seemed to enjoy it and played games with his child, even if they were princess dress up games. There was obvious conflict in his relationship with Jules, as will happen when one person in a couple works long hours every day. Rather than focusing on that conflict, however, the movie takes it a step further and the husband begins an affair. Jules and her intern both find out. When they discuss it, Jules is all about how to keep her marriage together. She takes the blame for the affair and even explains that part of why she’s looking for CEOs is so she can be home more. She says that her husband will easily find a new wife, but that she, as a “difficult” person and a demanding job will never find someone else and have to be buried alone. It’s a stab at the thought that a woman whose career is taking off can still have a good romantic relationship (Also at no point is Jules truly “difficult,” but that is a whole separate issue). The conversation is so derailed that at one point, Robert De Niro’s character, Ben, has to say the line, “I hate to be the feminist in this conversation, but…”

There in lies the issue with this subplot. After setting up this rockstar woman, who is running her own company, but who still cares enough about the product that she takes the time out of her day to show how packages should be assembled, Nancy Meyers destroys her in a single conversation.

At 2 hours, I don’t particularly think this movie needed an additional subplot. There were enough of those that didn’t have answers – what happened between Jules’s assistant and Jason? Did Davis ever find a place to live? Why was nothing resolved with Jules and her mother? There also were enough scenes that didn’t add much to the movie that could have been cut for a better development of some of these subplots, or even the affair one, which was awfully rushed as is. Was Jules’s rant about what happened to gentlemen necessary? Did the woman at the funeral who wanted to date Ben need such a long, angry conclusion? While hilarious, did the incident where Ben and the interns were retrieving Jules’s email to her mother really add anything to the movie?

However, if all the writers determined that Jules needs conflict in her marriage, I think there was a way to do so without being dismissive of Jules’s success. In the scene that wraps up this subplot – in which Jules quickly forgives the transgression – her husband claims that somehow he got lost along the way. I think that this is a very real concern when couples suddenly have one person give up their job and stay home for childrearing. If your whole life becomes about the home and your child, whether you are male or female, I can see how you may feel like you have lost a part of yourself. You may need more than just the domestic routine to feel like a whole person. Could this struggle, then, have been the marital subplot? Could Jules and her husband focus on giving her husband meaning outside the home, rather than detracting from the meaning she got from her job? Regardless of gender, I feel this is a relatable conflict that may have even emphasized the original feminist message because it would not have questioned either of their choices to choose non-conforming paths.

I liked The Intern. I laughed. I rooted for Jules and Ben. I loved Jules’s daughter. The movie is a step in a good direction. But I saw the affair story coming and would have been more surprised and impressed by the movie if it had not fallen into the obvious trap. So, I will recommend it to friends, but I won’t be praising Hollywood for its feminism yet.